In recent years lot of popular technologies were adjusted so they can run in Docker containers. Our industry even coined new verb - dockerization. When something is dockerized we usually expect it to behave like self-contained app that is controlled with either command line switches or environment variables. We also assume that apart of this kind of customization the dockerized thing is zero-conf - it will start right away with no further magic spells.

It's just awesome when things work that way. Unfortunately there are exceptions and Jenkins is one of them. The problem with Jenkins is that even when you start it from within a container, you still need to:
Pretty bad. It resembles installation wizard like in Windows. Phew. Couple of weeks ago I was trying to check out how well Jenkins would solve one of our data transformation (ETL) problem and was unsure how many times it will be deployed. Hence I needed to do something about this installation process so it sucks less. All of the building blocks were already on the table: Terraform, Ansible and Docker Swarm. The missing part was pre-configured dockerized Jenkins running in the Swarm. 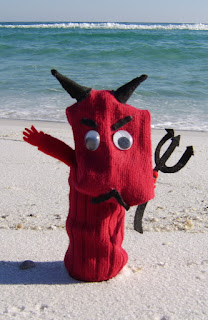 I remember that in one of C projects (not sure what was it, but perhaps something from GNU, maybe RMS update: it was xterm) there was this comment "abandon all hope, ye who enter here". It also mentioned how many people have ignored this warning and tried to refactor something. I have the same reflections w.r.t. configuring Jenkins without custom Groovy scripts. I was reluctant to learn new language, but eventually this seemed like the most reasonable way to continue.

Of course, all of following problems can be solved in a troglodyte way too. E.g. you can configure by hand, extract Jenkins home directory, targz it and re-use. But that brings couple of other problems. Also, surprisingly fresh Jenkins home weighted about 70MBs in my case. I always thought that it's just bunch of XML files, but perhaps it's not that straightforward. Since primitive solutions didn't work right away, I decided to stop for a while and try to solve the problem "the right way".

System is simple: there's one master (and it's an brilliant example of a SPOF, but nobody cares, since you're unsure of future) and number of workers (slaves). We want workers to register to the master automatically. Unfortunately this is not possible using plain JNLP solution, because you need to register the worker in master prior to establishing a link. In theory you could do some curl magic, but fortunately there's a plugin that does it for you - Jenkins Swarm (not to be confused with Docker Swarm, as it has literally nothing to do with it). Jenkins Swarm plugin consists of two things: a plugin for master Jenkins and Java JAR for slaves.
So we're set up. Jenkins Swarm will take care of auto-connecting slaves. Now, we must run dockerized version of these slaves and put it to Docker Swarm. But before we talk about slaves, let's handle the master.

Let me paste Dockerfile and explain it line by line.

We must start with some Jenkins image in order to customize it. In my case that's slim Alpine Linux version 2.89.1. Then there's build argument for the proxy. You can ignore this part if you're not behind one.

Before we modify the image, we need to switch to root user. After we're done we should switch it back to jenkins fo better security (if you wonder how to check it without base image Dockerfile, docker history command is your friend). In my case I'm also installing some python3 stuff defined in requirements.txt dependency file. If you're not willing to add any package to the system, you can skip this entire part too.

Then, we approach configuring plugins. In different places in Internet you can find an advice to use /usr/local/bin/plugins.sh but believe me you don't want to do this, as this installs plugins without their dependencies. Newer install-plugins.sh script takes care of dependencies for you. In our case we're installing two plugins. You might want to install just the essential one - the swarm plugin.

Now, four nonstandard lines. I believe that setting runSetupWizard to false is self-explanatory. The rest of lines are there for account setup, proxy configuration and executors configuration.

I'm not Groovy expert so don't judge me by the code above. I have started with just knowledge that it runs over JVM :). It's actually looks like nice managed language. The good part is that, as in Python, the code mostly speaks for itself. Hudson Legacy is visible here as well. I won't go into details - if you want to know from where all of this magic comes, pay a visit to official docs. Don't forget that you can also use infamous Jenkins console. I found Groovy's dump built-in very helpful too.
So the above script will actually setup an admin account, but doesn't hardwire anything. Both username and password come from Docker Secrets that allows you to manage sensitive data in your Swarm cluster nicely.

Now, the second script is for proxy:

Here's some magic too. It sets up proxy 1.2.3.4:8080 but with specified exceptions. Then it modifies Jenkins instance (which seem to be a singleton).

And finally, executors part. I wanted this one so master is not used as a worker at all.

Now, since the master is ready, let's configure slaves. Their Dockerfile is as follows.

This time base image is docker, because we want to have docker installed within this docker container (so this container can spawn other containers). After setting proxies (the part that is not mandatory) we must download Java Runtime Environment version 8 and download swarm-client JAR. I'm using version 3.3 which is accessible through URL as for today.
Finally, there's an entrypoint that will execute swarm-client and do all the magic, but it heavily relies on Docker Secret named jenkinsSwarm, which should look like following.


Here master_address must be known to slave machines (e.g. in /etc/hosts, Consul or something). You should also include username and password - the same ones that you share in other Docker Swarm secrets.

If you're using Ansible like I do, it's pretty straightforward to utilize variables instead not to hardcode credentials. For instance ansible-vault can be used for this.

entrypoint.sh itself is almost one-liner:

It assumes that it's running in the Swarm and can access /run/secrets/jenkinsSwarm (the line that's pasted above).

Glueing it all together.

Building blocks are already in place. Now it's time to glue everything together. I don't want to go into details here, because this is not primary topic of this blog post. If you're interested in how personally I did everything please let me know in comments, so I will create GitHub repo. Let me however give you some important hints:


Hopefully this post helps you with setting up Jenkins cluster that simply works. If you'd like to see the code, let me know in comments!