In most programming languages there are sane rules that specify what can be an identifier and what cannot. Most of the time it's even intuitive - it's just something that matches [_a-zA-Z][a-zA-Z0-9]*. There are languages that allow more (e.g. $ in PHP/JS, or % in LabTalk). How about C++? Answer to this question may be a little surprise.

Almost a year ago we had this little argument with friend of mine whether dollar sign is allowed to be used within C++ identifiers. In other words it was about whether e.g. int $this = 1; is legal C++ or not.
Basically I was stating that's not possible. On the other hand, my friend was recalling some friend of his, which mentioned that dollars are fine.

The first line of defense is of course nearest compiler. I decided to fire up one and simply check what happens if I compile following fragment of code.

And to my surprise... it compiled without single complaint. Moreover, clang and MSVC gulped this down without complaining as well. Well, Sławek - I said to myself - even if you're mastering something for years, there's still much to surprise you. BTW such a conclusion puts titles like following in much funnier light.

It was normal office day and we had other work to get done, so I reluctantly accepted this just as another dark corner. After couple of hours I forgot about the situation and let it resurface... couple of weeks later.

So, fast forward couple of weeks. I was preparing something related to C++ and I accidentally found a reference to the dollar sign in GCC documentation. It was nice feeling, because I knew I will fill this hole in my knowledge in a matter of minutes. So what was the reason compilers were happily accepting dollar signs?
Let me put here excerpt from GCC documentation, which speaks for itself :)

I think three most important things are:
What got me thinking it this list of architectures. And it took me couple of minutes to find out that e.g. assembler for ARM doesn't allow dollar sign. So any assembly code generated by GCC for ARM would not assemble if dollar sign was used. That's plausible explanation why GCC doesn't allow such a character for all architectures. It doesn't explain why compilers allow it for others, though.

GCC could theoretically mitigate problem with particular architectures by replacing $ signs with some other character, but then bunch of other problems would appear: possible name conflicts, name mangling/demangling would yield incorrect values, and finally it wouldn't be possible to export such "changed" symbols from a library. In other words: disaster.

What about the standard?

After thinking about it for a minute I had strong need to see what exactly identifier does mean. So I opened N3797 and quickly found section I was looking for, namely (surprise-surprise) 2.11 Identifiers. So what does this section say? 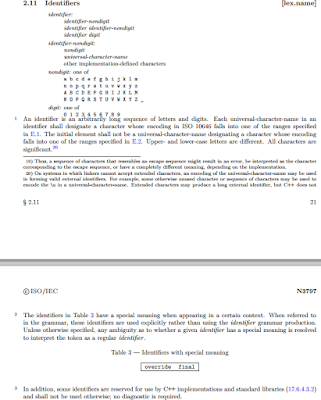 Right after formal definition there is an explanation which refers to sections E.1 and E.2. But that's not important here. There is one more thing that appears in the formal definition and it's extremely easy to miss this one. It's "other implementation-defined characters". What does it mean? Yup - the compiler is allowed to allow any other character to be used within identifiers at will.

P.s. surprisingly cppcheck 1.71 doesn't report $ sign in identifiers as a problem at all.